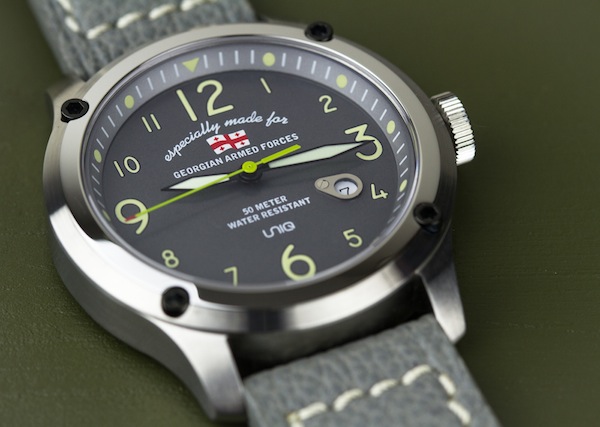 The watch market has been thoroughly saturated with models that have been designed for (or worn by) some sort of military outfit. JLC makes the Navy Seals diver, Sinn has the EZM 2 which carries the insignia of the counter-terrorism force known as GSG 9, Luminox has been selling models for years citing a connection to the Navy SEALS, and Bremont continues to make specialized models which are exclusively sold to military outfits (when was the last time you saw an instragram photo of a red-barreled MBI?). Many vintage watches that were made for military use are vastly more desirable than their civilian counterparts so it's easy to see why a brand would want to connect itself with the heritage, prestige and go-anywhere charm of an elite military fighting force. If a watch can handle the stress of combat, surely it can deal with the dangers of my channel-surfing lifestyle. Such is the connection that the Uniq GAF draws between its self and the Georgian Armed Forces. 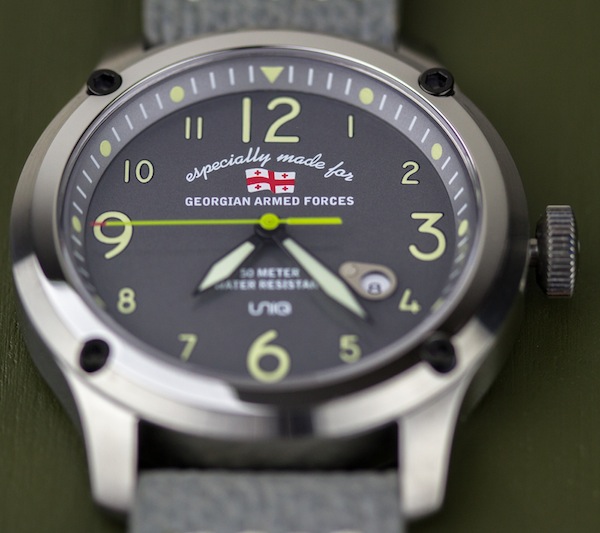 As is prominently displayed on the dial of the GAF, Uniq has produced this model especially for the Georgian Armed Forces. Now, before we all raise a mint julep in a display of southern pride, it is important to note that Uniq is based out of the county of Georgia, and not the American state. Nevertheless, Uniq is the first supplier of watches to the Georgian Armed Forces and the GAF is meant to be a tough yet simple tool for their soldiers. 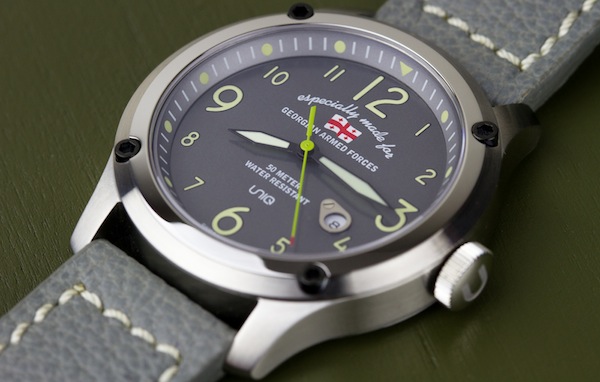 Measuring 44mm across and 11.5mm thick, the GAF is nicely sized for a sport watch and its stainless steel case exhibits a simple style that is fitting for a tool or military application. The overall style would suggest that the GAF is a pilot's watch with its flieger-style hands and military-inspired dial and I think the proportions are pretty good, though the minute hand is a little shorter than I prefer. 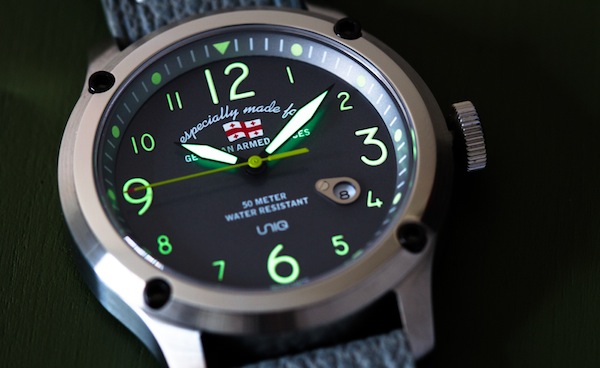 The GAF features an anti-reflective flat sapphire crystal up front and a solid stainless steel case back in the rear. Ticking away inside the case is a Ronda Swiss quartz movement which effectively manages the functions for this three-hander plus date. The hands and markers have been fully treated with Superluminova and glow nicely and with a brightness normally reserved for a dive watch.

The case is nicely made and well finished for the price with some additional visual interest coming from the four non-functional black screw heads fitted into the bezel. I think the GAF would have looked fine without these screws, but they certainly don't spoil the overall look. The dial design, on the other hand, is going to be a rather divisive aspect with "Especially made for the Georgian Armed Forces" prominently displayed on the dial in a position normally reserved for branding. I would have liked to see "Uniq" given more attention on the dial and the Georgian Armed Forced given less of the precious real estate or even moved to the case back. Georgia does have a rather smart looking flag that is also featured in the dial design. 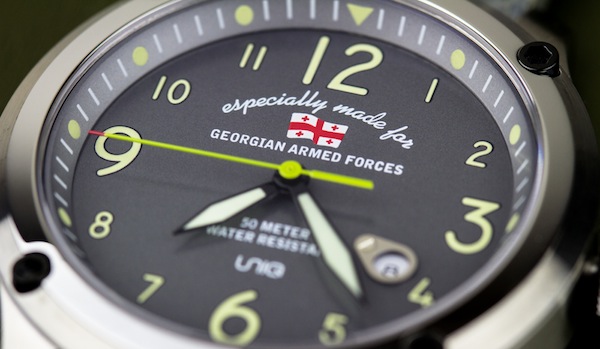 This is mostly a matter of opinion as I don't have any local affinity to Georgia or their Armed Forces, as I am many thousands of miles away in western Canada. I suppose my regional equivalent is something like a Marathon SAR which often sports a maple leaf design (dubbed the MSAR) and has been said to be the watch worn by the Canadian Coast Guard. For me, that detail makes the Marathon MSAR more appealing and I can only assume the GAF would have the same effect for anyone with an affinity towards the Georgian Armed Forces, regional or otherwise. 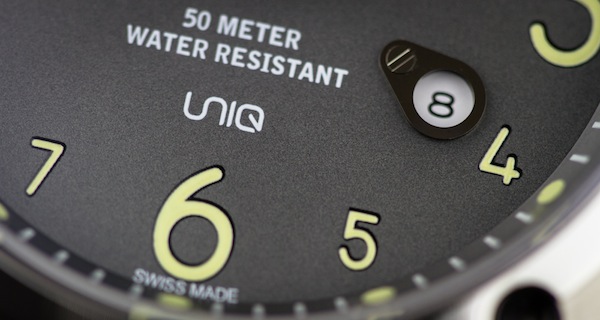 I did want to make note of the rather cool date aperture on the GAF. Located at four o'clock, the window as a metal surround that is fitted with a small screw. Excellent detailing that matches nicely with the larger crown and bezel screws. The date wheel is black text on a white background which suits the grey model nicely but may stand out a bit on the black dialed model. 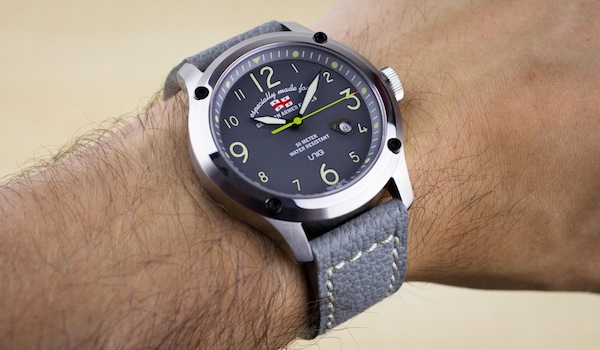 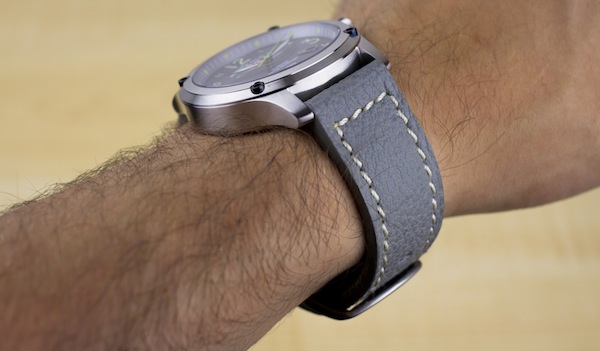 On wrist, the GAF wears well as it rides low enough to fit under most cuffs and is actually quite light at only 87g as reviewed. The included grey leather strap is soft and nicely suits the color of the dial. Given its simple case, wide-set 22mm lugs and military aspirations, the GAF also looks good on a NATO style nylon strap. Uniq sells the GAF directly through their site for $350 USD and buyers can choose their preference of a black, grey, tan, or green dial. Each dial choice comes with a distinctly colored leather strap and the watch ships in a small wooden box that is reminiscent of an ammunition crate. 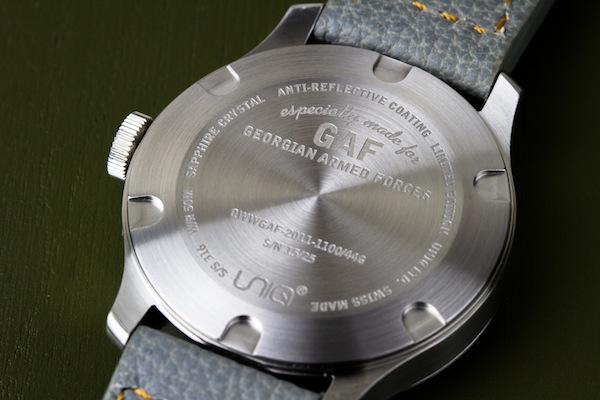 The price is high but not surprisingly so and the GAF will need to wage war against incumbents like Seiko, Citizen, mid-range G-Shocks and even entry level Swiss options from Tissot and Hamilton. I like the size and weight of the GAF as well as its eccentric lime green second hand, but I find the dial design to be a bit too complicated for the watch to have a traditional military appeal. Even with that in mind, the GAF is limited to just 100 units and I don't think they will have much difficulty finding a Georgian wrist for each one.